There are many reasons for making the journey to the delightful Lakeland village of Hawkshead. It may be because of its connection with Beatrix Potter and William Wordsworth or simply as it is a nice run out through the picturesque routes of what was the northernmost part of Lancashire. 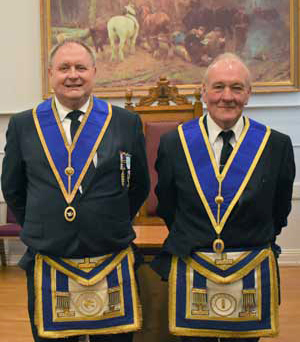 But aside from all the obvious motives there is the attraction for Freemasons of attending one of the most welcoming and unique lodges in the Province. No more so than the occasion of the installation meeting of Hawkshead Lodge No 4354 which attracts visitors from far and wide.

Many lodges have their own individual quirks but Hawkshead Lodge can be considered unique in that it is held in the Market Hall which was built in 1790 and which has seen no structural work undertaken since 1887. The Market Hall is overlooked by the church of St Michael and All Angels. The church has been built and added to over the centuries beginning as a chapel in the 12th century. It can still boast some Elizabethan features.

The upstairs assembly room is the venue for the meeting. But due to the lack of space it is necessary for those not in rehearsal to wander off elsewhere as they wait for the lodge to open. Similarly, between the end of the lodge meeting and the commencement of the installation banquet the room must be vacated as it is converted into the dining room. The most popular haven for those homeless and unfortunate Masons is directly across the square in the 500-year-old King’s Arms, although there are other hostelries that also provide sanctuary (and craft beers).

The scene in the Market Square.

It is invariably a lovely day in the last of the summer sunshine when the meeting is held. So many men dressed in dark suits and sporting the same ties proves somewhat of a tourist attraction in itself as holidaymakers from as far away as the United States of America and Japan enquire as to the reason for this strange gathering. Little did they know when they set foot in the village that they too would be making an advancement in Masonic knowledge!

The lodge set up for rehearsal.

This year the principal guest was Assistant Provincial Grand Master Frank Umbers who was accompanied by Furness and South Lakeland Group Chairman Peter Schofield. They were able to witness Phil Burrow install village resident David Cole as his successor in fine style. It is David’s second, and he maintains last, time in the principal office of the lodge. It was manifestly clear that David was as proud to be installed as WM on this occasion as he was on the first. Phil is well known throughout the group and has proved an excellent ambassador for Hawkshead Lodge, something David will undoubtedly continue.

Due decorum and probity was observed throughout what was an excellent ceremony. The ritual was conducted under the watchful eye of Dennis Batey in what was his swansong as director of ceremonies. Dennis has attained almost legendary status in the top of the Province having held the role for 23 years. Not only did he have to make the scenic journey from his Grasmere home to Hawkshead for lodge meetings but he also had to oversee rehearsals which, out of necessity, are held at Windermere Masonic Hall in the adjoining Province of Cumberland and Westmorland. Fine service indeed.

The lodge being transformed into the dining room.

Also leaving office on the day was secretary Andrew Thompson Jnr who had served, by comparison, a mere 7 years in the role. When he joined the lodge in 1989 Andrew followed in a family tradition in joining his father and two uncles as a member. At that time he was living in Kendal but several years ago moved out of the area and has undertaken the role of secretary from the far side of the Pennines as he lives near York. Quite remarkably during those 7 years Andrew has only missed two meetings of the lodge. Another wonderful display of commitment and service.

David will have a busy year as the new WM with a full programme of work which includes various degrees awaiting him and two 50th celebrations.

As always adding greatly to the enjoyment of the gathering was keyboard virtuoso Paul Gregson who once again provided the melodies, musical interludes and accompaniment throughout the whole proceedings. He really adds to the occasion.

After the final toast the lodge members, having set out the lodge room, dismantled it and set up the dining room, they then had the work of clearing away the tables and chairs. Everyone of them deserves thanks for helping to ensure that the day and evening went so extremely well.

Whilst they were still at their labours the visitors were either making their way to mini-buses or cars whilst others, who were staying overnight, had ventured to the local watering holes to meet up with their wives who spent the evening together and had enjoyed a meal.

A very happy occasion spent with friends old and new whilst enjoying excellent ritual, followed by good food whilst doing their bit for the local economy, what is there not to like about a trip to Hawkshead Lodge? 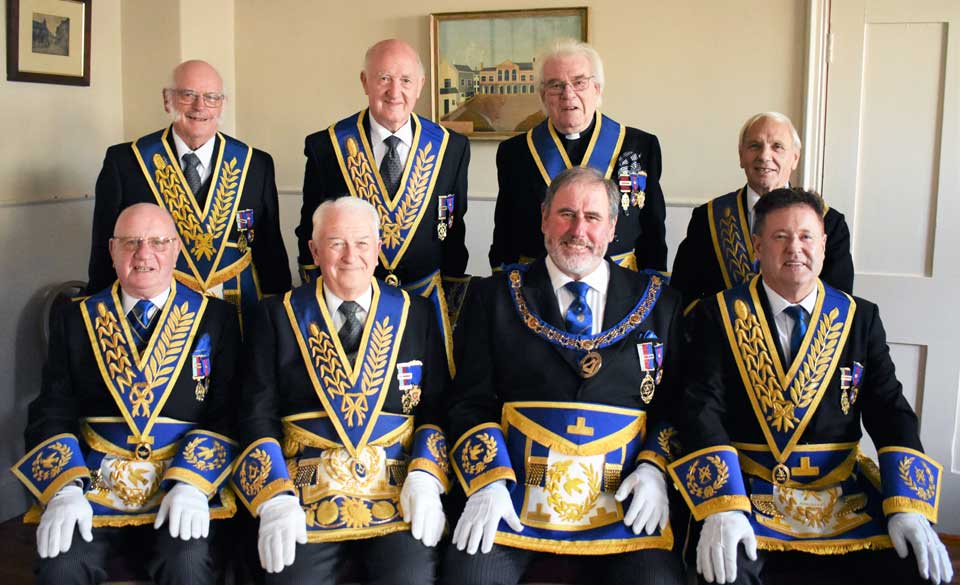