The ‘house full’ signs were up for the installation meeting of Newby Bridge Lodge No 4598. The lodge holds its meetings in its own small, idiosyncratic building which was gifted to them by a member and is located within the grounds of the Newby Bridge Hotel. 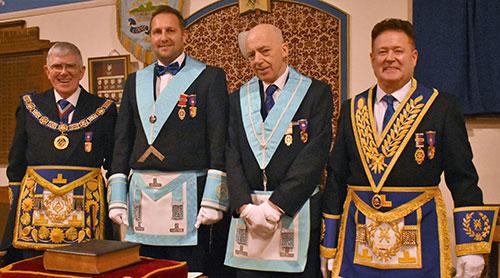 There is always a good turnout for the installation meeting but when the Provincial Grand Master Tony Harrison and members of his Provincial Team are in attendance then the result is that the room becomes even cosier than is usual.

A further grand officer Keith Kemp was present in his capacity as Provincial Grand Director of Ceremonies and he oversaw the formal processions which included amongst its ranks Provincial Junior Grand Warden Barry Dickinson together with seven other acting Provincial grand officers.

Outgoing WM Joe Crabtree welcomed Tony to the meeting before asking Provincial Grand Charity Steward Phil Preston to take the reins for the ceremony of installation.

Phil was a most appropriate choice to install Mark Little as master as he had been his proposer for membership and had conducted Mark’s initiation ceremony.

In what was later described as a ritualistic master-class, Phil undertook his work with great accuracy, obvious feeling and superb delivery. It was a pleasure to witness.

Phil was also pressed into action again and gave the address to his good friend, the newly installed master. 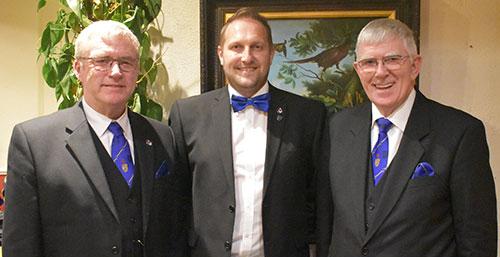 Pictured from left to right, are; Phil Preston, Mark Little and Tony Harrison.

Acting Provincial grand officers Reg Wilkinson and Steve McKellar took to the floor to address, respectively, the deacons and stewards as to their duties.

Geoff Biddulph presented and explained the working tools of the third degree. However it was junior members Gary Mansfield and Chris Alexander who attracted the most praise for their presentation of the tools of the other two degrees.

With the room so full and all eyes on them it must have been with some trepidation that they went about their work. Both performed their parts well and deserved the congratulations they later received. In particular the work of Gary in the oration of the long version of the tools of the second degree, with not a word out of place and outstanding delivery, received great plaudits.

Lodge director of ceremonies Phil Burrow can take great pride in the work of his charges as can secretary Jack Lowther for his efforts in making all the arrangements.

Tony, following his tendering of greetings and congratulations to Mark, thanked Joe for all he had done for Newby Bridge Lodge during his year in the principal chair. He remarked that wherever he had been within the group Joe had been ever-present and had proved a hard-working ambassador for the lodge. 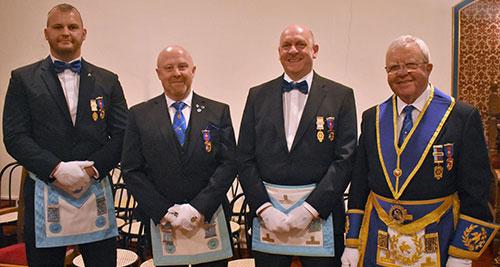 Phil was thanked by Tony for his work in installing Mark as was everyone who had taken part in what he described as, ‘an excellent ceremony with first class ritual.’

During the year the lodge had donated patronage of £1,005 to the Masonic Charitable Foundation 2021 Festival. Members had contributed a further £833 which had attracted an additional contribution of £177 from the Gift Aid scheme. The lodge donation of £1,005 meant that it had achieved the threshold to qualify as a Patron of the Festival and group charity steward Richard Wilcock was on hand to present a certificate confirming this.

It fell to David Winder to bring greetings on behalf of the grand officers. As he holds responsibility for the charity team he no doubt took a particular interest in the work of Phil. He was effusive with praise for all who had taken part in what he said was, ‘a ceremony that was delightful to witness.’

Following the formalities of the ceremony, 90 members and their guests retired to the comfortable dining facilities of the adjacent Newby Bridge Hotel and enjoyed an excellent installation banquet.