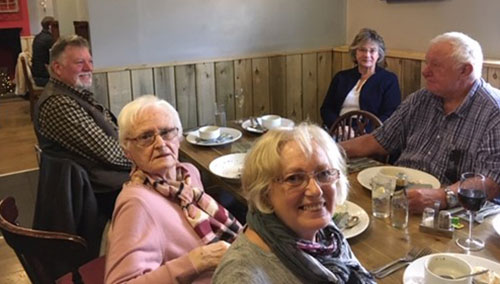 Adrian reports: “This was our first visit to the Hinds Head Inn, which is located in the small hamlet of Welch Whittle, Charnock Richard.  It has been known as the Hinds Head for the last 140 years or so but was originally called the Dicconson Arms in the early 1800’s and then the Welch Whittle Stock’s Tavern in the mid-1800’s.

It was a well-attended meeting with 20 members and guests braving the biting cold northerly wind that told us our ‘Indian summer’ was well and truly over. Consequently, there was only one classic cabriolet in evidence.  This was owned by Stuart and Linda Mason, who had brought their 1971 Mercedes-Benz 350SL with the hood firmly in place against the elements.

As they promised at a previous meeting, Mick and Barbara Norris drove to the venue in their 1961 Jaguar 3.8 Mk2.  They arrived on time and without any mechanical problems, but bear in mind they live less than 300 yards from the Hinds Head.

Many others, me included, had arrived in their modern daily drivers, so the car park was a long way from the Masonic Classic Car Club displays of the summer.  My excuse was that there were three of us, so the 2-seater Mercedes SL remained tucked up in the garage.

It was good to see Peter Meakin again, our life vice president, who briefly reminded us of his time as a WW2 fighter pilot.  I’m sure he has many WW2 stories to tell us.

Thanks to Dennis and Cath for organising another successful Chairman’s Run.”