Carl in at Baldwin

The brethren of Baldwin Lodge No 1398 are confident that the traditional maxim; ‘If you want a job doing well, give it to a busy man’, will be proved to be true following the inauguration of Carl Hallows as the newest incumbent of the pre-eminent chair in the lodge. 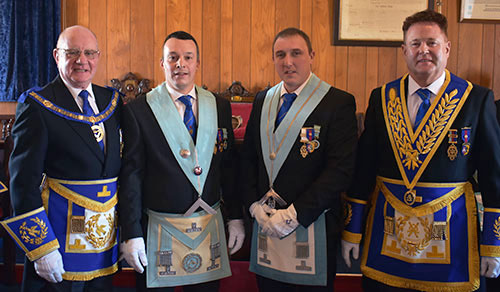 Assistant Provincial Grand Master David Grainger was the principal guest at Dalton-in-Furness Masonic Hall for the installation meeting and he outlined some of Carl’s Masonic responsibilities.

Primarily though Carl, who works in the local submarine yard, is a committed family man with two young daughters. As well as his Masonic involvement he is a campanologist at the parish church. Carl served his community as the officially appointed ale-taster for Dalton-in-Furness and when no ready replacement was available for the post he quite unselfishly continued in the role for three full years!

A resident of Dalton-in-Furness, Carl’s home overlooks the 14th century Peel Tower known as Dalton Castle. This is where Baldwin Lodge originally met when it was founded in 1872. The lodge is named after its founder Colonel William James Atkinson Baldwin, occupation given simply as a gentleman, who lived in the then family home known as Baldwin House. This building too can be seen from the Hallows’ family home.

Amongst those in attendance on this special day were grand officers Rowly Saunders, Alan Jones and group chairman Peter Schofield. Deputy Provincial Grand Director of Ceremonies Barry Fitzgerald was accompanied by five other acting Provincial grand officers in the persons of Les Newlands, Reg Wilkinson, Barrie Bray, Graham Dowling and Steve McKellar. Les and Graham having made their way round Morecambe Bay from the Lancaster Group.

Another keen observer was Dean Anderson who had made the journey across from Ryton Holy Cross Lodge No 4231 in Durham to witness his niece’s husband going into the chair. Outgoing master Craig Boothroyd installed Carl into the chair with assistance from lodge secretary Dave Sear.

Carl was presented for installation by his proposer and lodge director of ceremonies Steve McKellar. With Steve being occupied in his provincial role it fell to his assistant Mike Benson to keep a watchful eye on proceedings. The address to the newly installed master was given by Carl’s seconder Brian Fallows. Brian Davey delivered the address to the wardens and David orated the address to the brethren of the lodge.

Junior members in the persons of Paul Williams, Allan Whittaker and Brett Newsham presented the working tools of the three degrees. Their work was very much enjoyed by all present and was later subject to great praise.

To mark the occasion David was presented with a cheque for £900 in favour of the Masonic Charitable Foundation 2021 Festival. As has become somewhat of a tradition of the lodge, he was also presented with a donation of £100 for the annual Christmas Tree Festival organised by the parish church. Dalton-in-Furness Masonic Hall not having the facilities to cater for the 100 members and guests who wished to dine the short journey to Barrow Masonic Hall was made.

In accordance with the long-established custom of Baldwin Lodge, Carl provided an installation cake which was beautifully decorated. There followed a superb four course meal, the menu being Cumbrian beef, which was greatly enjoyed. The alms collection at Dalton and a subsequent raffle at Barrow saw £552 raised for charity with a further £280 going to the Dalton Masonic Hall Building Fund.

During the course of the evening various people were thanked for their roles in helping the day pass so smoothly. Mention was made of those volunteers at Barrow Masonic Hall who prepare the dining room and ensure that all is ready for their visitors from the ancient capital of Furness, as Dalton is known, but it is worth repeating that their often unheralded efforts are very much appreciated by all who use the hall be it on a regular or occasional basis.

The banter and camaraderie continued well into the night and proved a most fitting end to what had been a fine afternoon and evening of ritual and friendship.