Gordon in at Ulverston

Furness and South Lakeland Group Chairman Peter Schofield was the principal guest at the installation meeting of Ulverston Lodge No 7872 held at Ulverston Masonic Hall. What a treat he had as he witnessed Steve Ellershaw install Gordon Evans as his successor in front of 100 members and visitors with what can only be described as great aplomb. Included in that number and no doubt adding to the pressure on Steve were the 13 masters representing every other lodge in the group, along with Daniel Crossley, master of Wyreside Lodge No 2605 in the Lancaster Group. 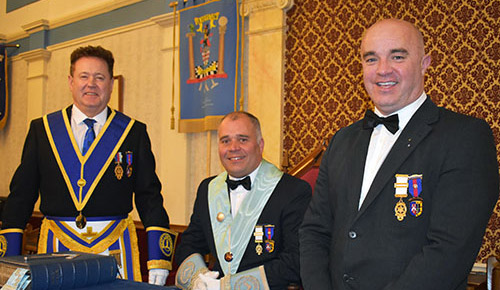 Pictured from left to right, are: Peter Schofield, Gordon Evans and Steve Ellershaw.

The large attendance did not appear to intimidate Steve as he went about his work with both accuracy and feeling. It proved a pleasure to observe and he had obviously put in many hours of work in order to be able to undertake the work in such an exemplary manner.

For his part, Gordon was called into action to invest and address his new team. The manner in which he did so leaves no doubt that the lodge is in good hands. Others too played their part in delivering a ceremony of an excellent standard. Group charity steward Richard Wilcock addressed the charity steward as to his duties, Steve Plevey did likewise in respect of the deacons and Keith performed a similar role as regards the stewards. 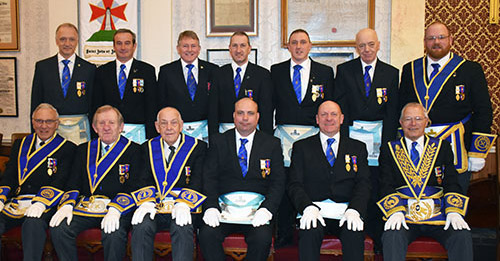 Special mention however and indeed praise must be reserved for the three junior brethren who presented and explained the working tools, namely Alan Oddie, David Kyle and Mike McKenzie. Being very junior brethren the accomplished manner in which they went about the tasks they had been set belied their inexperience and was very well received. The future of Ulverston Lodge looks healthy as all the progressive offices were filled by light blues with five of that ilk occupying the stewards’ bench.

To mark the occasion Gordon presented Peter with a cheque for £765 in favour of the Masonic Charitable Foundation 2021 Festival. Richard then stepped forward to present Gordon with a cheque for £300 in match-funding from the group charity account to acknowledge the support Ulverston Lodge had given to the various group fund raising events. This entitled the lodge to style itself as a Patron of the MCF 2021 Festival and Richard presented Gordon with a certificate acknowledging this. 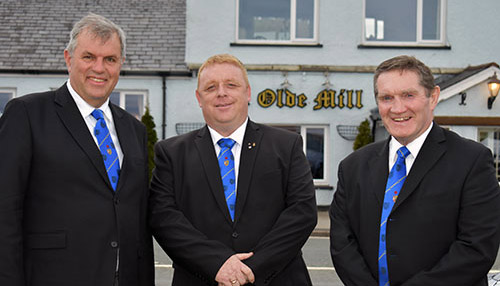 Pictured from left to right, are the visitors from the Lancaster Group: Steve Jennings, Daniel Crossley and Jim Hamilton.

Richard being on hand, the cheques were quickly returned to him for onward transmission. Richard is a retired police officer and it was somewhat of a coincidence that he received the cheque for £765 as his police collar number had been 765. Mention was also made of the other charitable donations made by the lodge over the year and the fact that it had donated £1,000 to the Ulverston Masonic Hall Building Fund.

Following the excellent ceremony of installation, the hall being unable to cope with the number who wished to dine, a short trip was taken to the Olde Mill on the coastal road overlooking Morecambe Bay where a splendid meal, the menu being beef, was enjoyed.

During his response Peter paid tribute to the efforts of Brian Benn who had stood down as lodge secretary after a nine-year stint. Special praise was also directed towards director of ceremonies Alan Hilton who had overseen proceedings in his own quiet and unassuming manner.

The good food and convivial company proved a fitting finale to what had been a highly enjoyable afternoon and evening.